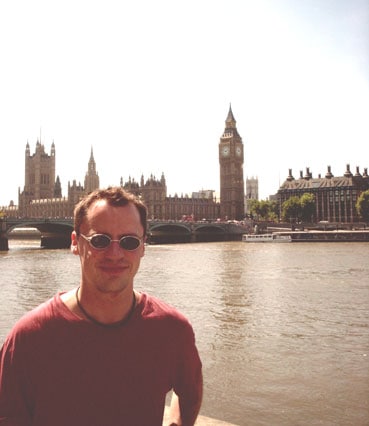 okay, several quick items: 1) these goofy british keyboards have the “shift” keys in strange places, so i’m rarely going to capitalize anything anymore. consider it all part of my european adventure. 2) i discovered that my hostel offers internet access for a pound per hour, versus the roughly 1.6 pounds per hour offered by burger king. there may not be any whoppers here, but i think my hostel is the better bargain. i was thinking of several jokes to make about the term “whopper,” but all seemed highly inappropriate. 3) last night i ended up going to a couple of pubs and clubs with a bunch of people from the hostel. i like to refer to this activity as ‘ubbing. love it. the night was mostly uneventful until i left one club with a couple of american women and dutch men, and some drunk australians ran into us claiming that they knew the drunk american women. the drunk american women claimed they didn’t know them, but we followed the drunk australians anyway. that’s just how things work in london. the club we ended up at was a 21-and-over club, and the drunk americans were too young. so i went to look for someplace to pee, and when i returned the drunk americans (from my hostel) were gone. i had no idea where i was, and the drunk australians (who were outside the club) weren’t much help. so i walked around the streets of london at about 2am for a really long time looking for my hostel. i eventually found it, and my 500 roommates were already asleep. 4) i’ve just returned from having several tasty beverages, so i apologize in advance for any inappropriate material or spelling errors i might make. 5) today i met my friend javier (from junior high and high school) for lunch and some sightseeing. i saw the houses of parliament, big ben, and some other crap. later i went to the imperial war museum, which was pretty cool and had an impressive and sobering exhibit on the holocaust. then i returned to the hostel for a breather and watched the simpsons with the pink-haired brazilian (and other folks) for a bit. it was amusing to listen to the people from various countries complain that the voices sounded so differerent (from their translated voices in their home countries). 6) i hooked up with jav again around 9pm at “the dog and duck” (or something to that effect), which is apparently one of oldest pubs in london. fun times. then jav took me to a gay bar (jav is gay) so that he could talk to a friend of his there, and we stayed there until they stopped serving (around 11pm). then he took me to a straight dance club, after which he soon went home and i hung out with this weird french guy and this weird italian guy for a while. the weird french guy made fun of my poor command of the french language, despite my 3+ years of formal education in the subject. silly frenchman. the club was way crowded, and i left after a short while. 7) these items are neither quick nor several. deal with it. i’m on holiday, and i play fast and loose with my language. 8) i’ve been perfecting my british accent over the past couple of days. 9) tomorrow i’m going to check out a few more london items, and then take the “chunnel” train to paris. 10) i have nothing else to say, but wanted to round my non-quick and non-several list to an even 10. 11) i’ve decided to add an eleventh item on sheer whim, but i’ve already forgotten what it was. i attribute this to my aforementioned tasty beverages. Oodles of toodles upon your poodles, Eric