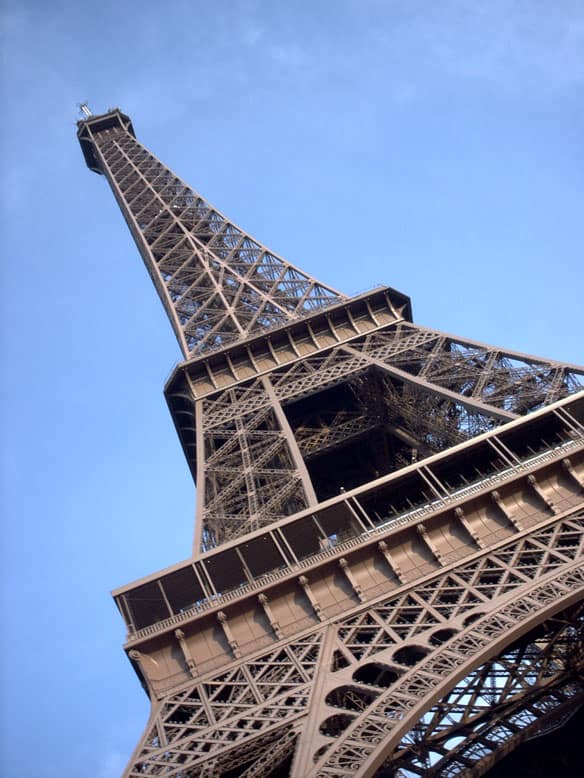 I am in Paris. I took the Eurostar train from London to Paris via the “chunnel” yesterday. I’m staying in a hostel in Montmartre, which is this cool old neighborhood of Paris. There are a total of 8 people in my room, but it’s really two separate rooms with the door removed and there are only 4 people in each room. It’s much less crowded than the London hostel I stayed in, and has more charm as it is an old hotel of some sort. After arriving yesterday I toured some of the major tourist attractions of Paris with one of my roommates. He is a young, Canadian journalist named Curtis. He’s quite intelligent and we spent much of our time complaining about American politics, comparing Canadian politics to Canadian politics, discussing the “Blame Canada” song from the South Park movie, etc. Anyhoo, we checked out le tour Eiffel (the Eiffel Tower), strolled down the Champs Elysee, and looked at l’arc de triomphe. Neat. While we were at the Eiffel Tower, I had a crepe sucree avec frommage et un oue (I’ll have to check the French spelling on this later) from a street vendor — it was basically a sweet-tasting crepe with cheese and egg. Nummy to my tummy. It was a little bit like a sweet breakfast burrito. Today I was at the Louvre for several hours, and then explored the Montmartre neighborhood a bit more. A large church called the basilisque du sacre couer is here, and is apparently the highest point in Paris (I took a few pictures to prove it). Later in the day Curtis and I toured the Bastille area of Paris, and then returned to Montmartre to drink beers at an Irish pub. I’ve taken many photographs, and several of them will be of special interest to my sister Julie: photos of the area where Princess Diana died (and the nearby wall where fans and whatnot have written notes), and tomorrow I will photograph the cemetary where Jim Morrison was buried (I found it today, but arrived after it had already closed). My legs and feet are very tired and blistered, and my knees are in quite a bit of pain. Yet I struggle through the pain for the benefit of you, my loyal reader.