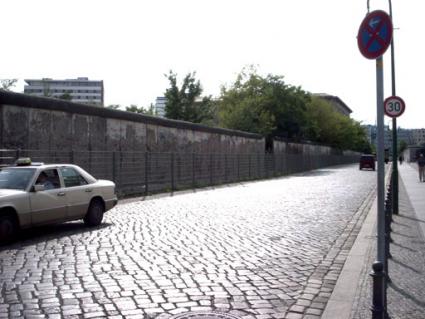 i’m in berlin now, and they have a funky german keyboard with the “z” and “y” keys (amongst others) in strange places. this is greatly reducing my typing speed. anyhoo, i arrived yesterday around 6pm or so and just walked around town a bit. the hostel at which i’m staying is by far the nicest one so far. there are 6 beds in the room (which i share with a couple from england, another couple from somewhere else, and an undergrad from alabama who is in berlin for several weeks doing research for his senior thesis), and we actually have our own bathroom and shower! woo-hoo! most of the hostels simply have communal bathrooms shared by the entire floor (or even several floors). it’s also very clean, quiet, and nicely located to many of the city’s more interesting historical sites and whatnot. today i wandered around on foot to see the following sites:

so that’s about all of berlin i’m likely to see. i wish i could spend more time here, as it’s a huge city and i only explored the little section that’s within walking distance of my hostel. but tonight i need to figure out how i’m going to get to sweden tomorrow (it’s a bit complicated because my eurail pass doesn’t cover travel through denmark, which is how one would typically get from german to sweden via train….i do get free passage on a ferry between germany and sweden, but i don’t know if their schedule will mesh with mine) and then do my laundry. i’m goin’ commando and wearin’ dirty socks today as it is, so i figure i should clean myself (and my clothes) up a bit before hitting the conference. incidentally, europeans do not like to put much ice (if any) in your tasty water and soda beverages, and it is very difficult to find big gulp-sized drinks here (much to my dismay). what a strange new world i’m in. more from sweden!