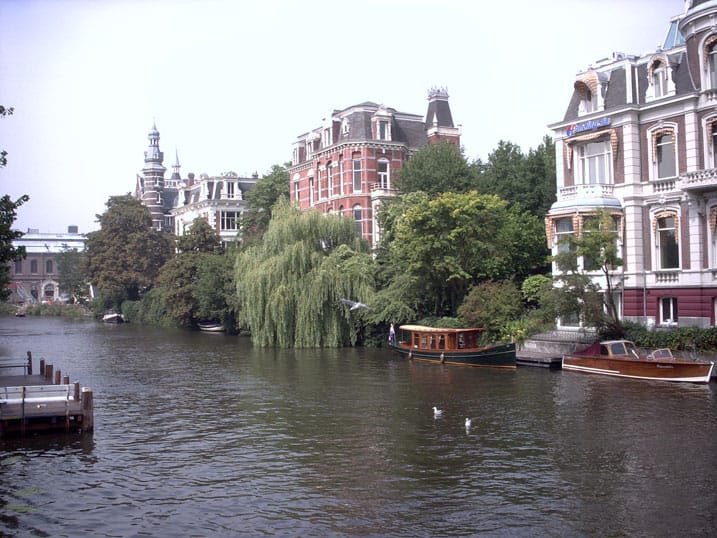 I’m in Amsterdam now, and it is fabulous. My last day in Brugges I rented a bike and rode it to the Belgian coast (to a town called Zeebrugges, about a 45-60 minute ride each way). I didn’t really know what to expect, and at first I was disappointed because the first area I came across was a very industrial-looking port area. However, it was nice to be by a large body of water, and I took a brief nap on a bench looking out into the harbor. Then I rode my bike a bit further down the coast and found a glorious beach, with lots of sand. So I chilled on the beach for a bit before heading back to Brugges.

I also learned a valuable lesson from my little cycling excursion: apparently Europe uses the same sun as the United States, and it has quite similar effects after prolonged exposure without protection. My face and arms got a bit burned (my face is a bit flaky today, actually, as some of the burned skin makes its way off my face). That evening I took my laptop down to the hostel bar and worked on my conference presentation for a bit while enjoying a tasty belgian beer and a tasty belgian waffle (with whipped cream and strawberries, no less). Then I had a long and amusing conversation with my Australian roommate, Michele and went to sleep relatively early. I left for Amsterdam the next day. Amsterdam is absolute madness, and I love it. I’ve just about had my fill, though, as it is very crowded here with tourists completely filling the streets (especially on the weekend).

The city itself is amazing — apparently Amsterdam is often called the “Venice of the north” because of all of its canals, and it’s really beautiful. I love the long history of all of these European cities; it seems the vast majority of the buildings in Amsterdam, for example, were built before the United States was even a country. My hostel is pretty disgusting, and is very loud because it is on a street that is heavily trafficked. I had to wear my ear plugs for the first time on Friday night. My roommates the first couple of nights included about 6-8 British twentysomethings here celebrating a birthday, two women from Spain named Raquel and Patricia, some really old dude (who I suspect may be homeless or out of work or something, as his only outfit seems to be a crusty old business suit), and a couple of other folks I didn’t really meet. The hostel is located very close to the infamous “Red Light District,” where many of the city’s prostitutes (legally) practice their trade. It’s a bit strange, as the prostitutes (wearing skimpy lingerie) stand/sit in little window displays (often with their pleasure bed and other accessories within view) that are highlighted by red neon lights, as people walk by gawking at them. Occassionally they try to recruit certain individuals by tapping on the window toward them, or even opening their door/window and calling out to them. If they get a customer, they negotiate the details of the deal and then bring them inside, close their window curtain, and get down to bizniss. It’s a very surreal and somewhat depressing affair; one can’t help but notice the similarities to a zoo as huge crowds of onlookers walk from window to window to stare at the women as though they were caged animals.

Other than that, Amsterdam is also known for its liberal drug laws, as it is legal to purchase and possess small quantities of marijuana, hemp, “magic” mushrooms, and other “soft” drugs. Many “coffeeshops” are basically marijuana shops, and the odor of marijuana smoke permeates the city streets (particularly in touristy areas such as the red light district). There are also many live sex shows, porn shops, and other sex-related businesses scattered about. I think I’m probably somewhat desensitized to a lot of this stuff due to growing up in Las Vegas, but I’m sure it’s a rather shocking affair for many people. Since I’ve been here, I’ve gone to the Van Gogh museum (very cool; Van Gogh is a long-time favorite artist of mine), the Anne Franke House (a museum and tour of the house where Anne Franke and her family hid from the nazis during the German occupation of Amsterdam in WWII; it’s a really powerful experience), the Torture Museum (where they have a bunch of medieval torture devices and whatnot), explored much of the city, danced all night long (last night; didn’t get home until about 8am and only slept for about 4 hours), and generally had a splendid time. Tomorrow I’m off to Berlin. It’s a long train ride (about 6 hours, I think), but that’s good because I have a lot of work left to do on my conference presentations. My laptop has been working beautifully, incidentally, and it’s long battery life (8 hours or so with the primary and secondary battery) is great. More later! Same Bat-time! Same Bat-website! POW!!!